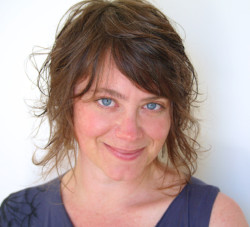 David Peterson (Northwestern) spoke with Natasha Myers, Associate Professor of Anthropology at York University and winner of the 2016 Robert K. Merton Book Award for Rendering Life Molecular: Models, Modelers, and Excitable Matter (Duke University Press, 2015). In the interview, Professor Myers discussed theoretical innovations and the next directions of her work.

David Peterson: What is the thesis of your book?

Natasha Myers: This ethnography develops new methods in sensory anthropology to show that that science is more and other than what we have long thought it was. It tracks the life science researchers who model the molecular substructure of living bodies, and documents in vivid detail the embodied, sensory, affective, performative, and aesthetic dimensions of scientific practice and pedagogy. The book takes readers into laboratories and classrooms where practitioners in the arts of molecular modeling go to great lengths to cultivate their skills, and to teach others how to see, feel, imagine, and know what they know about the molecular realm. A central claim of the book is that while these researchers publicly avow mechanistic approaches to the sciences of life, relying heavily on machinic metaphors to describe molecular forms and interactions in the texts they publish, close ethnographic attention to the ways they animate molecular life through stories, and through their articulate movements and gestures, shows that more often than not, practitioners deviate from these conventional scripts. Indeed, by documenting renderings of molecular life that waver between the machinic and the lively, this book shows that mechanism, even in twenty-first century life science, has failed to fully disenchant living matter. Asking “What is life becoming in modelers’ hands?” this book amplifies an otherwise muted liveliness inflecting mechanistic accounts of the stuff of life. In their hands, living matter becomes excitable.

Peterson: How do you see this book contributing to studies in feminist technoscience?

Myers: This book takes inspiration from works by Donna Haraway (1991, 1997), Lucy Suchman (2007), Karen Barad (2007), and many other scholars who develop feminist and queer methodologies to examine forms of performativity, affect, agency, embodiment, and objectivity in science. Feminist technoscience is also particularly attuned to the fraught relations between power and knowledge, and between epistemology and ontology, and these are also prominent themes in the book. One of the primary ways Rendering Life Molecular contributes to this literature is by documenting a group of scientists whose practice of objectivity closely resembles Haraway’s (1988) articulation of “situated knowledges.” These molecular modelers acknowledge and even celebrate the profound contributions they make to producing and securing robust visual facts, and they accentuate, rather than disavow, the role embodied knowledge plays in this process. Indeed, for them, objectivity is measured not by their efforts to detach themselves from their objects, or through forms of automation that would keep their subjectivity at bay; but rather, by their willingness to give themselves over to the laborious process of model building, and allow their objects to inform and transform how they see, feel, and know the molecular realm. This book tunes into the stories scientists tell about their intimate relations with their objects of study, and hitches a ride on scientists’ gestures and movements in order to document the affective entanglements of inquiry in the life sciences. Where forms of “mechanical objectivity” would disavow these entanglements, molecular modelers insist on accounting for how they know what they know, on the partiality of their knowledge, and on locating their unique contributions to crafting visual facts. In this way, they demonstrate what feminist objectivity might look like in practice.

Peterson: Can you talk a bit about the central metaphor of your book? How did you come to the concept of “rendering”? How did it evolve?

Myers: Rendering is a widely used term in computer modeling to describe the processing of images to make them appear three-dimensional, but it also has much older and wider meanings, such as when it is used to describe the process of giving oneself over to a practice, or defined as the act of inflecting or infusing a quality into some thing. The concept of rendering took shape for me while I grappled with ways to understand both the performativity of visual facts in science, and how the visual cultures of science are simultaneously performance cultures. What I came to see is that the models that these scientists build are more than just representations of the molecular realm. I was finding that when molecular models were treated as representations at the end-stage of model building, they could at best gesture at the probable configurations of atoms in a molecule, and as such they tended to induce significant epistemic anxieties about the limits of scientific vision and the epistemic failures of scientists. When treated as renderings, however, models became not just things that stand in for knowledge or phenomena; they could also be seen as enactments or performances that generate new ways of knowing and things known. By treating models as renderings I could redirect my ethnographic attention to the practices of model building and the ways that modelers’ kinesthetic knowledge and intuitions shape and are shaped by the molecular realm. The concept of rendering could also shed light on the performative effects of visual facts: to engage models as renderings is to insist that they do more than just re-present molecular phenomena. Indeed, these models rend the world in some ways and not others, pulling, bending, and tearing at the world to render life molecular.

Peterson: You develop the notion of “haptic vision” to provide a richer account of how scientists draw on their sensory capacities. Can you discuss how kinesthetic entanglements either undermine or expand traditional notions of objectivity which tend to rely on a much narrower concept of scientific “vision” as that which can be explicitly represented and reproduced?

Myers: The concept of “haptic vision” is not new, but it acquires new significance in light of the challenges that molecular modelers face in their efforts to make the molecular realm visible, tangible and workable. Protein crystallographers and other molecular modelers have no direct visual access to the molecular structures they hope to make visible, tangible, and workable. In order to build a three-dimensional atomic-scale model of a protein molecule, they must enmesh themselves in complex technological prostheses in order to decipher probable structures from the scattered shadows of X-ray diffraction patterns. Model building is a hands on, laborious, and often wayward process, and to date, methods for deciphering molecular structures from diffraction patterns have not been fully automated. As such, modelers must rely extensively on trained intuition, tacit and embodied knowledge, and aesthetic judgment. Building a model is an affectively charged performance that engages a modeler’s entire sensorium. It is in the process of building and manipulating their models that modelers’ perceptions, sensibilities, and dexterities are entrained to molecular forms and movements. As a modeler builds their model onscreen, they simultaneously articulate an embodied model, to such an extent that the richest, most detailed model of their molecule comes to reside in their kinesthetic imagination. In the process, modelers’ bodies become the most articulate proxies for rendering molecular forms and movements. Molecular modeler’s vision is thus profoundly haptic; that is, what they come to see and know is shaped by a synesthetic tangle of touch, movement, kinesthesia, proprioception, imagination, memory, and intuition. Getting to know what molecules “look like” is not a detached, disembodied, or neutral process; it involves practitioners’ learning to palpate imperceptible realms, and cultivate a feel for the molecular realm (cf Keller 1983). Objectivity, for these practitioners, is thus profoundly situated, embodied, and felt, and the most robust visual facts are those that can be enacted through the articulate bodies of expert crystallographers.

Keller, Evelyn Fox, A Feeling for the Organism: The Life and Work of Barbara McClintock (New York: W.H. Freeman, 1983)